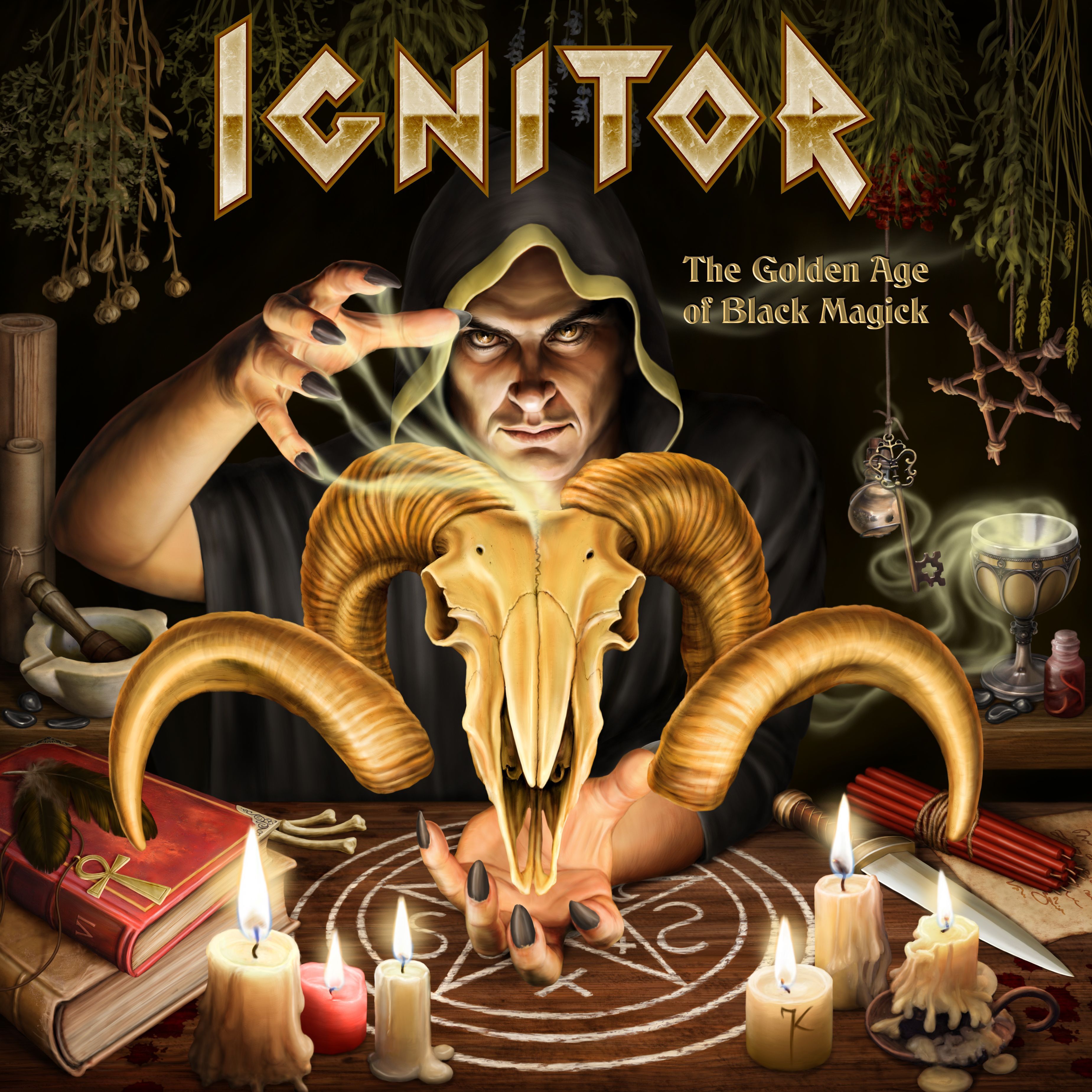 1. Secrets of the Ram
2. Countess Apollyon
3. The Golden Age of Black Magick
4. Hell Shall Be Your Home
5. Tonight We Ride
6. Steel Flesh Bone
7. Execution Without Trial
8. Stoned at the Acropolis

We at Metal on Metal Records are proud to announce the co-operation with the Texas metal masters, IGNITOR, featuring veterans of the scene known from bands like AGONY COLUMN, WATCHTOWER, DANGEROUS TOYS, HOWLING SYCAMORE and many others. Their name should be already familiar to most heavy and US power metal fans as the band was formed back in 2003 and have released six albums so far through European and US labels. Earlier this year, they finished the work their seventh full-length "The Golden Age of Black Magick", which is the living proof they still have it in them like almost 2 decades ago. Fronted by Jason McMaster whose distinct and aggressive vocals perfectly complement the music, the band offers high-energy, intensely passionate metal anthems harkening back to the glory days of unrelenting fist-pumping heavy metal that will certainly please fans of ATTACKER, DIO, RIOT, SKULLVIEW, ASKA, CAGE, RAINBOW, IRON MAIDEN, JAG PANZER and the like.

1. To Brave the War
2. Haunted by Rock & Roll
3. Heavy is the Head That Wears the Crown
4. Hatchet (The Ballad of Victor Crowley)
5. Leather Forever
6. Nomad
7. No Sanctuary
8. Throw Them From the Cliff
9. Hung Drawn and Quartered

“Primitive, primal, down to earth and anthem-oriented for the studs and leather-clad hordes, Ignitor fuse the best of American, British, and German heavy metal from the first half of the 1980’s and spit out songs that shine.”  [8.5/10]

“There isn’t a lackluster song to be had here, which makes it an absolute must for all fans of true heavy metal might. If you want to keep it true, you can’t go wrong with this one. You just can’t.” [9/10]

“If you grew up during the early 80s when records by Judas Priest, Black Sabbath and Kiss would sit comfortably alongside those of Iron Maiden, Accept and Anthrax, then “Haunted By Rock & Roll” will indeed have you in headbanger heaven.”

“Haunted by Rock’n Roll is a great piece of old-school speed metal.”

“Reminds us that Heavy Metal is supposed to be high energy, fun music and these guys do it well in the modern day.”

“Not one track would I label as filler. If you like your metal straight up without any bells and whistles, then this is the album for you.”

“Executive producer and label owner/founder Dave Ellefson (Megadeth) does have an ear for good taste. ”

This is IGNITORs new record. It is a compilation of IGNITOR playing our favorite classic metal tunes. Super fun and a must have for all metalheads, it embodies the excitement of the old school 80's metal experience.

Year of the Metal Tiger

Year of the Metal Tiger

This is IGNITORs fourth record. It was recorded in 2011 and released in the spring of 2012. We really got back to basics on this one: no ballads, a guitar solo in every song, no over-arching conceptual storyline to confuse the instant gratification addicted. Just classic metal by metalheads for metalheads.

You can purchase YOTMT from our label MVD here:
http://mvdb2b.com/s/link/MVD5350A

This is IGNITORs third record and the first to feature Jason McMaster on vocals and the return of Beverly Barrington. It was recorded and released in 2009. The Spider Queen is a concept album following the traditional "boy meets girl, girl turns out to be a giant spider that's also his mother, boy's grandmother kills girl, boy kills grandmother" format. I still don't know why some people didn't "get" the story. This album diverged a little from the true metal ideal as Batlord was inspired by long form rock 'n roll works including "Rocky Horror Picture Show" and "Flash Gordon."

This is IGNITORs second record, the last to feature Erika on vocals and the only to feature Annah Moore on guitar. It was recorded in the summer of 2006 and released in 2007. This is a great record that never got the chance to be properly promoted. Unfortunately, Erika left the band the week it was released, leaving IGNITOR unable to play until a new singer was found.

Take To The Sky